Announcing the Results from HARO’s 2014 Survey of Homeschool Alumni

Posted on December 2, 2014 by nickducote 5 comments 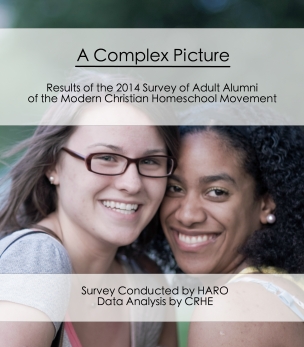 Homeschool Alumni Reaching Out is happy to announce the 1st installment of results from our 2014 Survey of Adult Alumni of the Modern Christian Homeschool Movement. Data analysis was generously provided by the amazing team over at the Coalition for Responsible Home Education (CRHE).

The survey, written by HARO Executive Director R.L. Stollar, was developed over a span of 9 months. Work on the survey began on November 24, 2013 and it was opened to the public on August 18, 2014. A set of approximately 90 initial questions were first created. These questions were then tested, modified, and re‐tested repeatedly over a span of 6 months to create the survey questions that were on the final version. The questions were specifically run by a diverse group of people, including Christians and non‐Christians, conservatives, moderates, and liberals, homeschoolers and unschoolers, and so forth. The final version of the survey featured questions on demographics, academic school experiences, non‐academic school experiences, food and health, religion, present and future personal life plans, sexuality, mental health, and abuse.

The survey, conducted online through SurveyMonkey, was estimated to take respondents 30 minutes to complete. It was first promoted through the homeschool abuse survivor community, from which it spread across the country through online social networks (primarily Facebook). Survey respondents were required to affirm that they were 18 years old or older, had been homeschooled for at least 7 years, were homeschooled in an environment which was classifiable as Christian (including Christian‐influenced new religious movements), and were taking the survey through completion for the first time. A total of 6,249 people started the survey; 3,702 respondents completed the survey before it closed on September 15, 2014. Only the completed responses were recorded and analyzed.

A Complex Picture: Results of the 2014 Survey of Adult Alumni of the Modern Christian Homeschool Movement

HARO is extraordinarily grateful to CRHE for donating an immense amount of their time and energy to analyzing the survey data. If you would like to support CRHE’s work, they are currently holding a fundraising drive.