HA note: The following is reprinted with permission from Libby Anne’s blog Love Joy Feminism. It was originally published on Patheos on May 9, 2016.

Have a look at the beginning of this article, from last week:

Last Friday, as soon as their mother climbed in the shower, five Sharp children bolted down the driveway of their Auburn, Kan., home.

Before they left, according to testimony in a Wednesday hearing, they took the guns out of a cubbyhole in the house and stashed them at the end of the drive. Then they got a ride from a neighbor to the Shawnee County sheriff’s office in Topeka.

And on Wednesday — three months after making headlines when they performed for armed occupiers who had taken over a wildlife refuge in Oregon — the children were taken into state custody because of abuse allegations.

At the end of a 2  1/2 -hour hearing in Shawnee County District Court that included testimony about alleged beatings that brought the children’s father to tears, a judge found probable cause that allegations of physical and emotional abuse were true. He placed seven of the children into the temporary custody of the Kansas Department of Children and Families.

“Any time I’m going to hear testimony that a child has been beaten to the point we have abrasions, broken skin and bleeding … that’s disturbing,” said Judge Steven Ebberts.

As you may remember, the Sharp children sang at the Oregon wildlife refuge in January during the standoff between self-styled “patriots” and government forces. 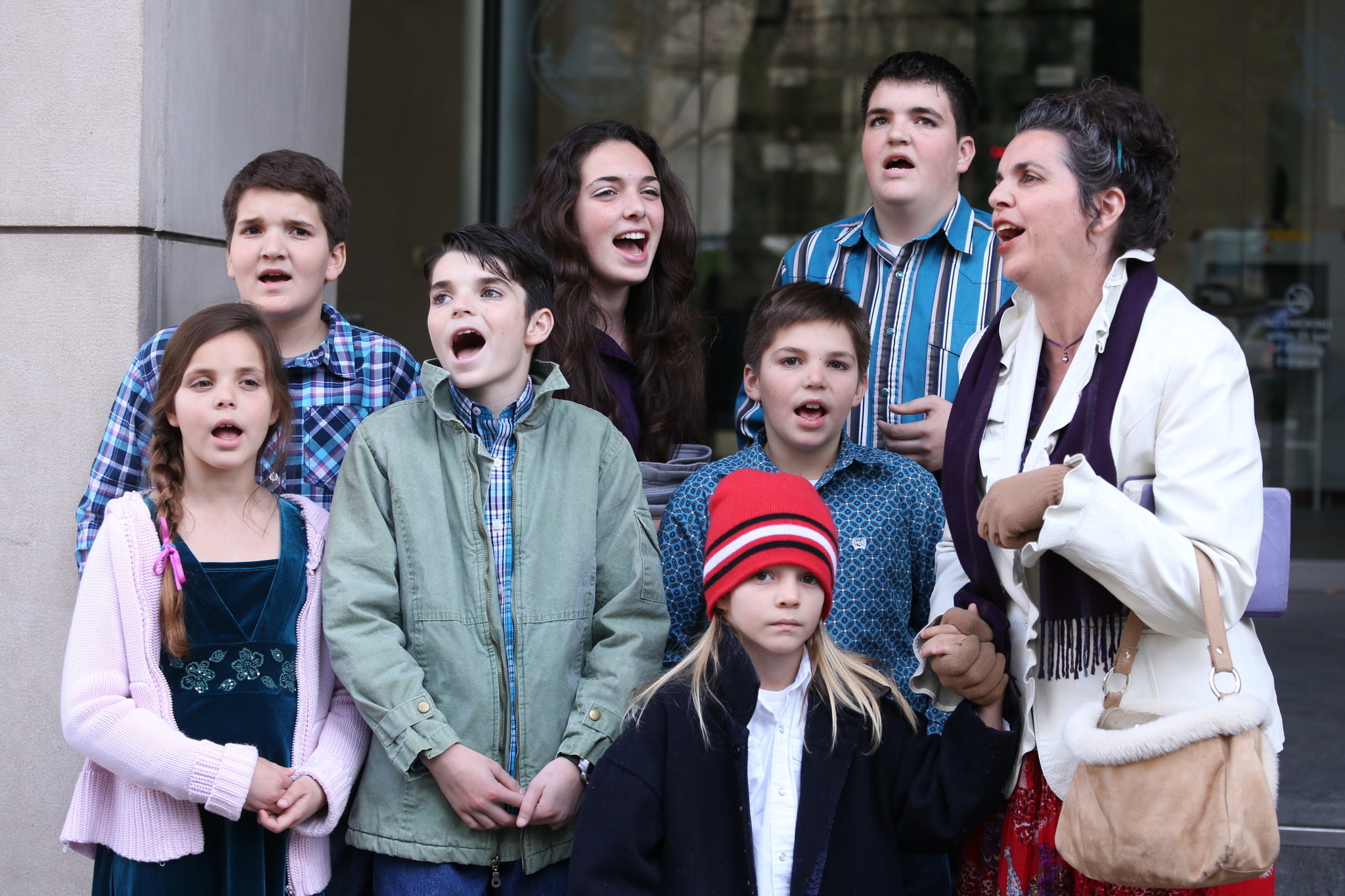 The children’s parents were divorced in 2012. Their mother denies the abuse, though she does not deny using a rod. She claims she is being persecuted by the government for her role in the standoff. The children were homeschooled, which helps explain the reason they engineered such a daring and dramatic escape:

At Wednesday’s hearing, a children’s department social worker said the office had received three reports this year about the children’s welfare. The first, she said, was in February, alleging a lack of supervision. She said they went to the home, but Odalis Sharp told them to leave. They scheduled a meeting, but she did not show up and later called to say she wasn’t in Kansas.

A second report was made April 12 alleging emotional and physical abuse. The worker said she called the sheriff’s office and asked them to try to assess whether the children were safe. But again, Sharp would not let them see the children, the worker said. The third report to the agency was Friday, the worker testified, when some of the children ran from the home.

When children attend school, a social worker can visit the school and meet with them there. When children are homeschooled, that same social worker has to try to gain access to them in their home. That can be difficult when parents like Odalis deny that access. A social worker can go to a judge for a warrant, but with only a tip to go on, and no further evidence, it can be difficult to obtain one, and social workers are generally severely understaffed, with scads of other cases on their plates. In this case, the children determined that their only way out was to run.

But before we head too far off track, I want to bring your attention to a detail I noticed the moment I first read the article:

Before they left, according to testimony in a Wednesday hearing, they took the guns out of a cubbyhole in the house and stashed them at the end of the drive.

They hid the guns. The article does not directly state why the children hid the guns but the import is fairly clear—the children were worried their mother would use the guns to cow them into staying and putting up with her abuse. This story brings up in stark contrast one of the least-talked-about aspects of the gun control debate—guns’ use in domestic violence. And no, I’m not talking about using guns to defend yourself against an domestic abuser, because that happens only rarely. I’m talking about the role guns play in the hands of the domestic abuser.

When we talk about gun control, the focus tends to be on mass shootings or, increasingly, terrorism. While we tend to conceptualize mass shootings with a model like Columbine or Sandy Hook in mind, in over half of mass shootings, an intimate partner or family member is among the victims (edited to add: indeed, Adam Lanza, the Sandy Hook shooter, shot and killed his mother before driving to the school).

And then there’s this:

Over the past 25 years, more intimate partner homicides in the U.S. have been committed with guns than with all other weapons combined.

[P]eople with a history of committing domestic violence are five times more likely to subsequently murder an intimate partner when a firearm is in the house.

Have a look at this statistic:

From 2001 through 2012, 6,410 women were murdered in the United States by an intimate partner using a gun—more than the total number of U.S. troops killed in action during the entirety of the Iraq and Afghanistan wars combined.

Or check out this data:

When an abusive partner has access to firearms, statistics show that domestic violence is more likely to turn deadly. According to research published in the American Journal of Public Health, the presence of a gun in domestic violence situations increases the risk of homicide for women by 500 percent. More than half of women murdered with guns are killed by family members or intimate partners.

In the spring of 2014, the Hotline conducted its own 8-week focus survey on the use of firearms in domestic violence situations. The survey revealed how the presence of a firearm in an abusive relationship intensifies the fear of abuse victims and escalates the violence directed towards them, regardless of whether or not the survivor is married, dating or being stalked by the abuser.

It’s no wonder the Sharp children felt the need to hide their mother’s guns before running. The presence of guns in the home increases the risk of homicide at the hands of a domestic abuser fivefold, but a victim of domestic abuse does not have to read the statistics to know that. They know that. As the Hotline focus study revealed, the presence of a gun “intensifies the fear of abuse victims”—and for good reason. It adds one more thing into their calculations when trying to find a way out—one  more very dangerous, deadly thing, one more point where they could be killed.

I very much hope that the Sharp children find safety and are able to build a new life away from what they suffered at their mother’s hands, but the fear that their mother may have access guns and come after them will likely long outlast any physical scars they may have. We need to center the role guns play in domestic violence situations in any conversation about second amendment rights and gun control. And lest someone suggest that victims of domestic violence should simply turn their abuser’s gun against them, let me remind you that women who shoot their abusers are not infrequently tried for (and even convicted of) murder.

Besides, does anyone really want to be in the position of arguing that the five Sharp children who hid their mother’s guns and ran should instead have turned those guns on their mother? No, they did what was likely the most sensible thing they could do in their situation—they hid the objects they knew presented a threat to their life and wellbeing, and they got the hell out of there. Let’s make sure we include the danger those guns posed to those children—and not in an abstract, “their mother could have shot them” sense, but in a very real, visceral, “they were in actual fear that their mother would shoot them” sense—in future discussions of gun control.