The recent revelation that Josh Duggar admittedly molested five young girls as a teenager has taken over social media for the last two days. There has been a wide array of reactions and speculations. But, for many who were raised in the same quiverfull and patriarchal homeschool world, this has been a time of reliving their own traumas brought about by that dysfunctional culture. Those who lived it know all too well how the teachings and attitudes that are part of the Duggar family’s life affect families, victims, and even offenders.

The Duggar family’s involvement in Bill Gothard’s Advanced Training Institute (ATI) homeschool program adds complexities to this story which are unknown to the average person. The underlying principles and beliefs the Duggars have built their lives around actually help groom and shame victims, help hide grievous abuse, and even keep offenders from receiving needed help.

The lessons learned from birth in homes like the Duggar’s strip children of their voice and agency. Starting with blanket training babies and toddlers understand quickly that disappointing a parent leads to swift and painful consequences. As they grow, it becomes clear that simply doing what is expected is not enough. It must be done instantly and cheerfully. Children are even forbidden to seek out the logic behind the request, as kids are prone to do, because that is seen a making excuses or delaying obedience. The consequences of failing to meet these expectations are severe. Gothard and the Duggars believe that spankings are necessary to save a child from their inborn nature to do evil, and these are not just any spankings. The Duggars endorse the child abuse methods taught by the Pearls. Growing up in an environment of fear, where questions are seen as rebellious, eventually makes children unable to speak up for themselves. They become unable to trust their own judgment of what is right and wrong. These children are the perfect targets for abuse; they do not know how to advocate for themselves.

Also, from a young age the children are instructed in God’s plan for their gender. Strict gender roles are the foundation of a patriarchal system. Girls learn their role is to be wives, mothers, and keepers at home. Most people know that for the Duggar family this includes the expectation of having as many children as possible.  Michelle Duggar is also outspoken about her beliefs on a wife’s subservient role and need to be sexually available to her husband. Children learn by watching their parents that men hold the power. This is detrimental for both boys and girls. Neither learns to have a healthy relationship without the power differential already in place.

All of this is accompanied by one of Bill Gothard’s 7 Basic Principles, Authority (these principles are the foundation to his Institute in Basic Life Principles seminar). This concept is taught with a diagram of umbrellas, which represent protection.

Notice the man has authority over the entire household. The teaching claims that as long as the father has no holes in his umbrella-sin in his life, then nothing bad can happen to the rest of the family. However, any member of the family can step out from under the father’s protection if they sin. Then all manner of evil can happen to that person. Therefore, if something bad, like a sexual assault, happens to you and your father hasn’t done anything wrong, it must be your fault. Knowledge of this fact keeps many from even disclosing their abuse. They are aware that questions about sin in their life are likely to follow any revelation of their violation.

In Gothard’s world there are many other ways in which sexual abuse can be the victim’s fault. At the ATI student’s Counseling Seminar students are taught Gothard’s method of helping victims of sexual assault. The handout pictured here is part of the teaching material.

Students are taught to question the victim if they had any fault in the assault. The most obvious way they would be at fault is if they defrauded their attacker. Defraud is Gothard’s favorite word for any dress, actions, or manners that cause someone to lust. This teaching is further backed up by a handout on moral failure released in the 90s after an ATI boy was caught molesting his sisters.

With this teaching a case can easily be made to blame the victim in some way. The feelings of arousal the offender felt must have been caused by some fault of the victim.

Defrauding is not the only way a victim can be at fault. Gothard also teaches that if a victim fails to “cry out” or be alert (one of the 49 required character traits everyone should have) enough to have anticipated the assault, then the victim bears responsibility. The story of Tamar, daughter of King David, is used to illustrate this point. It is easy to see how these teaching have set up a system where the victim bears the blame. Anyone raised with these beliefs is set up to struggle with a lifetime of shame and guilt while still bearing the scars of their abuse.

Before the victim has a chance to make sense of what has happened to them or deal with the chaos of emotions, they will also be reminded of another one of Gothard’s 7 Basic Principles-Suffering. This principle emphasizes the necessity of forgiveness and has dire warnings about the consequences of unforgiveness. If a victim fails to forgive, bitterness will take root in their heart, and bitterness causes pieces of your soul to be given to Satan. Satan will then build strongholds on this piece of your soul. 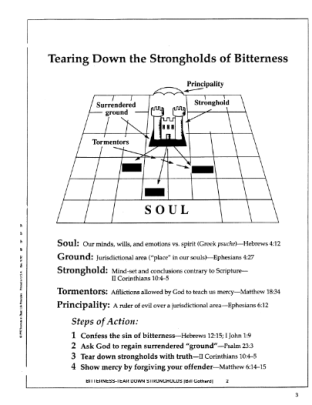 This teaching is also echoed in the handout from the Counseling Seminar. Victims are to be reminded that their soul has more value than their bodies, so forgiving the offender must be the priority. Any suffering caused by the assault is then brushed aside.

The Duggars assured the public Josh’s victims have received counseling. Yet, the type of counseling taught in their world does not promote healing. It teaches shame. How can these young people be expected to heal from such a violation with these principles guiding the process?

The Duggars also claim that Josh received counseling. It is reported this counseling was done over three months at an old VA hospital in Little Rock, AR. While there he did construction work. The old hospital was donated to Bill Gothard for use as a training center. The Integrity Construction Institute was at that time a part of this facility. Evidence that manual labor is an effective treatment for sex offenders is hard to come by. Construction work alone would be a disservice to someone seeking help.

It is important to note that any counseling received from someone associated with ATI would be driven by the belief that mental disorders do not exist. This approach to counseling would be ineffective to address the very nature and needs of a serial molester.

Any counsel Josh did receive would probably be similar to the counsel noted earlier, in the handout on moral failure from the 90s. 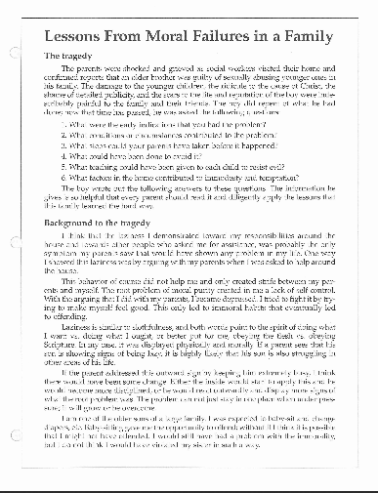 Josh Duggar’s situation as a teen was critical. Studies show that young offenders who are able to get the right kind of help reduce their probability of reoffending by more than 50%. Yet, as far as we can tell, that kind of help was not available to him. The ATI system of counseling not only fails the victims but the offenders as well.

This toxic system of beliefs originated with Bill Gothard, a man who had to resign from his own ministry last year when faced with dozens of allegations of sexual harassment and abuse. Even though Michelle and Jim Bob were aware of this, they still continued to use these teaching in their home and promote them using their fame. They also continued to speak and teach at the annual ATI family conferences. They have failed to see how their own system of belief has contributed to the devastation in their own family and in the ministry they promote.

The secrets the Duggar family hid all these years have tragic and devastating effects. The lives of five victims will be permanently altered. ATI only helped cover their abuse. ATI also was unable to provide the necessary counseling that Josh Duggar desperately needed at that time. The consequences of that failure could have changed to course of his life.

Bill Gothard’s cult creates a world in which abuse thrives in secret, and those that need help the most are silenced and shamed.