UnBoxing Project: Being an Angel with a Shotgun

Eleanor Skelton blogs at eleanorskelton.com, is the news editor of the UCCS student newspaper, and is majoring in English and Chemistry. The following was originally published on Eleanor’s blog on March 4, 2015, and is reprinted with permission. 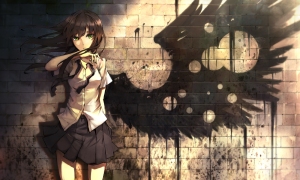 Get out your guns, battle’s begun,
are you a saint, or a sinner?
If love’s a fight, then I shall die,
with my heart on a trigger.

– The Cab, Angel with a Shotgun (Nightcore remix)

These are the stories they told me.

“Eleanor, my best friend’s parents told her she can’t drive the car unless she loses weight consistently every week.

I’m really worried about her. Yeah, she could lose some weight, but it’s not that bad, and I don’t think that’s healthy. What do you think I should do?”

My insides went cold, feeling the familiar rigidity and control descend, but this time for someone else.

They say before you start a war,
you better know what you’re fighting for…
if love is what you need, a soldier I will be.

“Eleanor, I’m 26 years old and my mom wants me to get married. She says she’ll send out the word among the [Indian] community to find a man for me. But I don’t want an arranged marriage.”

My friend already had a bachelor’s degree from an ivy league college, wasn’t enjoying her post-baccalaureate pre-med classes, and knew her parents wouldn’t understand her adoption of American culture.

She asked for help in moving her things out of her parents’ house. I rounded up a few friends and she got out.

I’m an angel with a shotgun,
fighting ’til the war’s won,
I don’t care if heaven won’t take me back.
I’ll throw away my faith … just to keep you safe…
and I wanna live not just survive tonight.

“Did you know Mike died?”

“No, I just talked to him last week. He was trying to start a chapter of the F.A.S.T. club at his graduate school.”

The coroner ruled Mike’s death a suicide. Mike grew up in the Colorado Springs homeschool community, although I didn’t meet him until college.

Questions about his death still linger with me and my friends.

Sometimes to win, you’ve got to sin,
don’t mean I’m not a believer...
Yeah, they still say I’m a dreamer.

“I need help. My dad is angry because he’s not making enough money. Can you help Lydia and me get out and find a place to sleep until our apartment paperwork goes through?”

“Dad was yelling at me when you tried to call. I never thought this would happen. We have a friend who will help, we might need help from you when we get back.”

“Dad says he might turn off my phone and Internet. Tell [a friend] to come if you don’t hear back again.”

I was five hours away up in the mountains and couldn’t come get her on the day that they were kicked out.

They say before you start a war,
you better know what you’re fighting for…
if love is what you need, a soldier I will be.

“I just want to go Home and be with Him. It’d be so easy… one bullet, one noose, two cuts, but I can’t bear to think of facing Him when I got there… For being a coward. For not trusting him enough… I really just want to escape. Wouldn’t you eventually get over it [grieving for me]. Death is a natural part of this life.”

A younger friend was suicidal again. She’d done this off and on since she was 13, and a couple of friends and I had talked her out of it, over and over.

“As long as I’m in class, getting A’s and studying all the time without a boyfriend or any other distractions, no one really pays me much mind. A fight’s brewing. So I’ll let you know after it happens if it does happen.”

Once again, her parents crushed her with unrealistic expectations.

I’m an angel with a shotgun,
fighting ’til the war’s won,
I don’t care if heaven won’t take me back
...and I wanna live not just survive tonight.

I didn’t become an activist because it was another hobby. Friends came to me with their wounds, their struggles. And I couldn’t just let them keep bleeding.

This is a series on helping isolated homeschoolers and religiously oppressed young adults escape cults and abusive households.

These are the ones I fight for.