When HSLDA Went To The Kremlin

Posted on January 9, 2015 by nickducote 8 comments 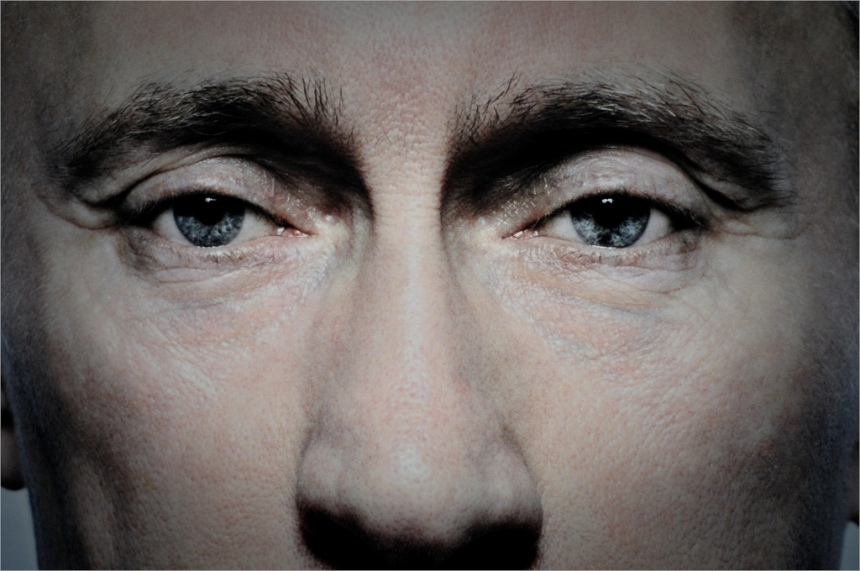 HA note: The following is reprinted with permission from Kathryn Brightbill’s blog The Life and Opinions of Kathryn Elizabeth, Person. It was originally published on January 8, 2015.

On September 10th and 11th of 2014, leaders of various right wing family organizations from around the world gathered at the Kremlin for what was to have been the “World Congress of Families VIII – the Moscow Congress.” The conference was a “pro-family” event that blended a mix of quiverfull, homeschooling, anti-abortion, and anti-LGBTQ organizations together.

Facing press questions on the wisdom of holding an event in Moscow after the Russian annexation of Crimea, as well as Concerned Women for America’s decision to withdraw lest they, “appear to be giving aid and comfort to Vladimir Putin,” the World Congress of Families canceled the event in March. Or rather, they officially canceled it, as the meeting went forward under the auspices of the local sponsors, with several World Congress of Families leaders acting as organizers in an officially unofficial capacity.

The International Forum: Large Family and Future of Humanity opened with the reading of a personal greeting from Vladimir Putin praising the conference. As documented by BuzzFeed, the conference was funded by a number of close Putin allies.

Both Michael Farris and Michael Donnelly of HSLDA were originally slated to speak, and until now it was believed that HSLDA was one of the organizations that had pulled out of the convention because of the Crimea situation. It turns out that’s not what happened.

Other than a single reference in an article about the German Wunderlich family that Michael Donnelly, “was in Germany on his way to an international family forum in Moscow, Russia,” HSLDA has made no mention of the Kremlin conference. I have now been able to document that Michael Donnelly was not only in attendance at the forum, but that he participated as a speaker.

I suspect that given how difficult it was to track down evidence that an HSLDA representative was in Moscow, HSLDA knew that the decision to cozy up with Putin wouldn’t play well back in America. That didn’t stop them from going, however. It just stopped them from telling their members that they did it.

On September 8, 2014 Donnelly made a public Facebook post indicating he was traveling to Russia to, “encourage homeschooling families and meet with other pro-family organizations as well as policy makers to discuss parental rights and family freedom’s.” 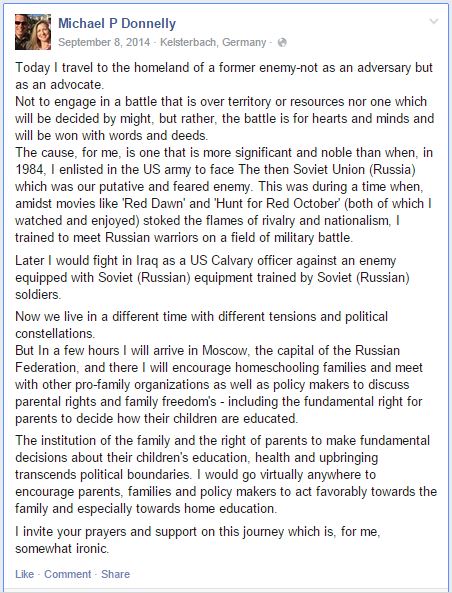 The next day, September 9th (the morning of the 10th, Moscow time), he updated the post with a comment about meeting with leaders of the Russian Orthodox Church and his plan to attend the conference at the Kremlin that day.

Donnelly also posted a link to the Russian language site of one of the conference sponsors, indicating that he would be speaking the next day (September 11th).

We were also able to locate a video clip documenting Donnelly’s speech.

The official conference website includes the text of the speech. It’s typical HSLDA boilerplate about parental rights, the UN Convention on the Rights of the Child, German homeschool laws, and scare tactics about the dangers of government overreach. The irony of claiming that government regulation of homeschooling was an unnecessary government intervention, while standing within the halls of a government that had just annexed another country’s territory by force, seems to have been lost on Mr. Donnelly.

Let me be clear here. While Michael Farris’ former employer, Concerned Women for America, bowed out of the conference because they did not wish to be seen as giving their support to an increasingly totalitarian and expansionist Vladimir Putin, HSLDA had no such qualms. They sent Michael Donnelly to the halls of the Kremlin in an action that helped add international legitimacy to Vladimir Putin’s efforts to position himself as a guardian of the family at a time when he was under growing pressure from the international community for his disregard for international law.

We do not yet know whether Vladimir Putin’s expansionist goals end with Crimea. Only time will tell. Without even going into the fact that HSLDA lent their support to an anti-LGBTQ conference at a time when the Russian government is cracking down on LGBTQ people, going so far as to propose taking away their children (something HSLDA ought to oppose but won’t), what Donnelly and HSLDA did is akin to going to a conference on families in Berlin after Germany annexed Sudetenland. You simply do not cozy up with expansionist, totalitarian regimes.

Agree or disagree with me on homeschool regulation. But HSLDA going to Moscow to a conference endorsed by the Kremlin after what Russia did in Crimea and Ukraine is irresponsible and indefensible.