Getting My Wings Back 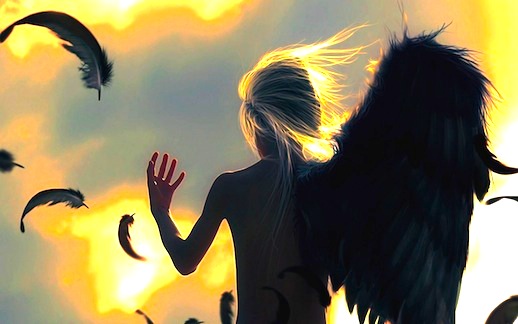 HA note: The following is reprinted with permission from Kay Fabe’s blog Post-Fundamentalist Fashion. It was originally published on June 9, 2014.

So I saw Maleficent over the weekend. And for me and many other sexual assault survivors, that gut-wrenching scene where Stefan cuts off Maleficent’s wings instantly read as rape. I just sat there staring in shock, like…. “No. He took HER WINGS. This is way worse than if he just stabbed her.”

Maleficent’s wings are her source of power. Stefan takes that power away from her, but in the end SHE GETS IT BACK. I was so, so happy about that. (I love that the idea of rape is so clearly tied to power, rather than sex, throughout the whole film, too. It’s not like “her wings are her virginity, and she lost that, so now she’s broken.” It’s like “Her wings are her power, and he stole them, but she can get them back.” YES, YES, YES.)

But in that scene where she’s slowly limping down the hill afterwards, stunned, leaning on her staff and trying to process what just happened, my heart bled. I know pretty much exactly what she felt like at that moment.

This story is for later, but the guy who assaulted me was much older and he was constantly pushing my boundaries and trying to get me to do things I felt uncomfortable with. (It says something that I thought marrying this dude would be better than living with my parents.) The actual assault was one of those pesky gray areas: it started out as a sort-of-consensual encounter, and then he told me to do something I was uncomfortable with and I said “No,” and then he grabbed me and made me do it anyway. We broke up soon after.

I was really angry at him for a long time, but the older I get and the farther away from it I get, I’ve started to feel like my anger was sort of misdirected. That dude only took up about four months of my life, tops. The homeschool culture spent 20+ years systematically stripping me of my privacy, dignity and autonomy as a human being.

I came to realize I was raised in a culture that stole my wings before I really knew I had them. My No didn’t matter. My Yes didn’t matter. Basically, nothing I said really mattered – so I quit trying to say anything. When Mr. Grîma Wormtongue first met me, he knew I would be a REALLY easy person to abuse, so he took advantage of that.

I don’t have a good way to end this, exactly, but I think it’s sobering that so much of the homeschool subculture is a massive power play. The people in control are determined to stay in control, even if that means systematically destroying the individual souls of individual kids. They’re basically like, “We don’t care about you as a person, about what you think or feel or say. We’re just going to do our thing and be in charge, and we don’t care if you get broken. In fact, it’s easier for us if we can break you.”

I was homeschooled, but I am getting my wings back. Feather by beautiful feather.