Homeschoolers Anonymous is made up of a diverse group of people. We don’t really have a “thing” that we all agree on other than this: we have seen or experienced harm within the conservative Christian homeschooling movement and we think those stories should be told. The truth should be known.

We know how unpopular it is to say, “Hey, I have some problems with homeschooling,” but we care about raising awareness so people can address the issues, make things better, and begin to heal. The first step is recognizing that a problem exists.

The Homeschool Legal Defense Assocation (HSLDA) made a decision yesterday. That decision was to respond via Facebook status (screenshot is here) to criticism from a former homeschooler who has been researching the impact and goals of HSLDA advocacy. This former homeschooler, Libby Anne (a blog partner of HA), came to the conclusion that HSLDA has not handled the issue of child abuse within homeschooling environments appropriately. Instead of responding to allegations of child abuse responsibly, HSLDA passed off these abusers as wrongly “persecuted” Christian homeschoolers.

These allegations are serious. When talking about Michael Gravelle, a man charged with abusing his biological kids and then putting his adopted kids in cages, Scott Somerville — an HSLDA attorney — called him a “hero.” This fact was documented by the Akron Beacon Journal and the Journal article has been preserved.

As if this was not enough, before this abuse case with the cages, Michael Gravelle had sexually molested his biological daughter, who ran away from home at age 16, which she personally disclosed in an interview. After the abuse case, Michael Gravelle punched and violently shook his wife. He was charged with domestic violence. Then a warrant was issued for his arrest because he failed to show up to his court hearing. Then Michael and his wife (not surprisingly) filed for divorce.

A man who molests his own daughter, puts his adopted kids in cages and shoves their faces in toilets as punishment, and then beats his wife is a “hero” to an HSLDA attorney?

Somerville made a massive error in judgment in calling this man a hero. If HSLDA does not condone child abuse, they should 100% condemn what Somerville said, and as directly as possible. At the very least. However, HSLDA said, “Any statements we may have made could be misunderstood to suggest that we condone the abusive actions of some we repudiate them wholeheartedly and unequivocally.” This does not cut it.

Perhaps Scott Somerville misspoke or truly did not realize what he was dealing with, but HSLDA is now trying to pass Somerville’s mistake off as a statement that “could be misunderstood.” At the very least HSLDA should have said “Scott Somerville was wrong to call Michael Gravelle a hero” rather than saying that such a comment had instead been “misunderstood.” If HSLDA cares about the well-being of homeschooled children, they should issue  a statement saying what homeschoolers should do when they suspect abuse within the homeschooling community.

Here’s the thing with abuse, people: it’s disgusting, it’s sickening, and we need to stand up to it. Abuse happens everywhere. As homeschooling advocates are so eager to point out, abuse happens in public and private schools. Absolutely! It happens in Christian homes and non-Christian homes, nuclear families and nontraditional ones. It happens in homes of every religion and race and — for all I know — hobby type. We help no one when we just point our fingers at the “others” and not take a good, hard look at ourselves in the mirror.

This is why I issued a challenge to HSLDA yesterday on their Facebook page:

Text reads, “HSLDA, will your leaders take a public and universal stand against child abuse and launch a public awareness campaign for your members on how to recognize and report child abuse in homeschooling?”

My call for HSLDA to launch a public awareness campaign against child abuse in homeschooling was quickly mirrored by others:

It has now been over 12 hours since a number of us former homeschoolers have issued this challenge to HSLDA. HSLDA has not responded and made no effort to unilaterally condemn Somerville’s calling a child abuser a “hero” or commit to taking concrete steps to address child abuse in homeschooling.

But HSLDA did have time to post this instead: 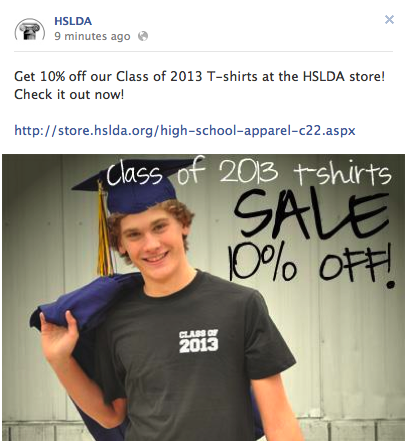 It is time to stand together — within and without the homeschooling community — and demand that HSLDA, the public face of American homeschooling, launches a public awareness campaign to fight abuse within our communities. Make your voice known on HSLDA’s Facebook page. Tweet HSLDA at @HSLDA with the tag #HSLDAMustAct.

We are going live with #HSLDAMustAct.

Together, we can make homeschooling better.