HA note: The author’s name has been changed to ensure anonymity. “Latebloomer” is a pseudonym. Latebloomer’s story was originally published on her blog Past Tense, Present Progressive. It is reprinted with her permission. 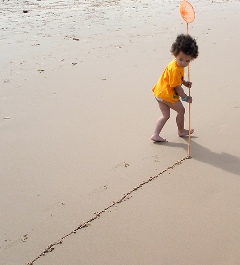 “I wasn’t secure enough in my boundaries, so I was hyper-sensitive to any attempts to control or manipulate me.”

I have to always say yes to others, or else I am selfish.

I have to always hide my hurt, or else I am unloving.

I have to treat other people as faultless, or else I am holding a grudge.

I have to keep my wants and needs to myself, or else I am a burden to others.

People who experienced authoritarian parents tend to turn into adults with poor boundaries. They were trained for it their whole lives and can’t imagine another way of doing things. However, it’s an extremely unsatisfying and unsustainable way to live, don’t you think? But most importantly, it’s actually not what a loving person is like! For me, when I was in that mindset, my “loving” actions were actually motivated by obligation or guilt because I thought I didn’t really have a choice; I was just an actor.

Besides hindering me from showing real love based on real choice, this mindset also prevented me from ever feeling loved. My buried wants and needs were still there; I just expected any true friend to be hyper-vigilant to my emotional state and correctly guess my unexpressed wants/needs. I felt that anyone who didn’t put in that monumental effort didn’t really care about me. And when people hurt me, I didn’t give them a chance to repair the damage to the relationship; I either lied to myself and them by saying that I wasn’t hurt, or I expected them to realize the problem and fix it without being told. Obviously, it was really hard for anyone to break through those defenses to form a real and lasting connection with me, even if they wanted to.

When I was in my late teens/early twenties, equipped with my driver’s license, I began to have more opportunities to interact with my peers.  However, with my poor boundaries and repressed emotions from authoritarian parenting, and with my severe social anxiety from isolated homeschooling, I wasn’t exactly set up for success. It’s not surprising that I was able to form friendships with more dominant and outgoing people most easily at first. They were the ones who were confident enough to break through my guardedness and befriend invisible me. I had no identity and nothing to contribute, and they were the ones who could talk enough to cover for my silence. They were the ones with ideas that I could go along with. And, thankfully, they were the ones who could ask me the pushy and nosy questions on occasion that helped to break open my protective shell.

It’s also not surprising, although really sad, that many of those first friendships didn’t last through the turbulence of my mid- and late- twenties. In a way, I was really experiencing my teens and twenties simultaneously. Out on my own for college, I was trying to discover and establish my own identity for the first time in my life, and dealing with an incredible amount of childhood baggage at the same time. And just when I felt I was making real progress in replacing social anxiety with relationships, my progress in forming boundaries set me back.

I asked my husband to provide a little outside perspective of what the process looked like, since most of it took place during our relationship. He sees it this way:

1. I realized that conflict had to be acknowledged and resolved rather than ignored in order to have a healthy relationship. That meant that it was ok to admit when someone’s behavior bothered me. However, since I had no experience at conflict management, I didn’t know when or how to go about it. I was a mess of over-reactions and under-reactions, and the whole time I was incredibly stressed and afraid of rejection.

2.  Once I began to open up about my feelings, wants, and needs, a backlog of repressed emotions suddenly started to flow out. In my mind, lists of ways I had been wronged started to appear, even from all those times that I thought I was being loving and not keeping a record. So, whenever I needed to talk to someone about a conflict, they would be surprised and hurt by the size of my list of related issues.

3. I wasn’t secure enough in my boundaries, so I was hyper-sensitive to any attempts to control or manipulate me, whether it was a friend or a family member. Even just their attempt to change my opinion by sharing a different perspective was threatening to me. Figuratively speaking, if a person even dared to knock politely on my boundary wall, I would appear with a shotgun and tell them to get off my property. I had very strong ideas about how I should be treated, and it was almost impossible for people to fit in my narrow tolerances. Everything had to be on my terms; I expected anyone who cared about me to change immediately when I informed them of a problem.

4. Now I’m finally feeling more secure in my boundaries, so I’m starting to become more balanced and pick my battles more carefully. I’m getting better at differentiating between real offenses and simple mistakes, as well as determining what approach might be most effective way to manage the conflict. I’m also trying to prevent emotional build-up by dealing with things right away. And most importantly, I’m trying to take other people’s differences and imperfections into account and realize that change usually comes slowly. It’s easier to accept that when I remember that others are also being patient with me in ways I can’t fully see.

I deeply appreciate my husband’s support during this process; without him, it would have been much more difficult to work through so many issues. Even though this process has been extremely challenging and painful at times, and even though I still have a lot of progress left to make, I am so much happier than I was before. Now when I choose to help people, I have the reward of feeling happy and satisfied because I did it willingly. Now I take responsibility for my needs, wants, and feelings, so I don’t feel so helpless and dependent. Now when I choose to tolerate people’s imperfections, I feel a sense of our shared humanity rather than feeling devalued.

However, it is unfortunate that I had to go through this process so late in life. I feel like it was much more traumatic than it needed to be because it conflicted with the progress I was making in forging friendships with people for the first time in my life. If you are dealing with similar issues as an adult, I’d like to recommend two things: read the book  “Boundaries” by Cloud and Townsend and find yourself a good therapist; hopefully you can find a way to establish and maintain good boundaries in a less destructive way than I did.